Check the job is enabled and set to run every 5 minutes.  Click Run Now to run the job straight away.

SharePoint 2013 SP1 has been released.  SP1 covers general stability, functionality and security fixes including compatibility fixes for Windows 8.1, Internet Explorer 11 and support for Windows Server 2012 R2.  Power Map for Excel 2013 has also been released for general availability.  For further information on what’s included and download links see below.

All other server products and language packs

If you’re using Power BI as part of SharePoint Enterprise you’re probably using Excel 2013.  Service Pack 1 for Microsoft Office 2013 is available here x32 / x64. Power Map for Excel is now native to Excel for Office 365 ProPlus users.  If you have Office 2013 Professional Plus or standalone Excel 2013 you can continue to use Power Map Preview until May 30th 2014.  More information is available here and here.

For information on how to apply updates to SharePoint see below.

If you need to force a tape to be free when you’re using System Center Data Protection Manager you can use the PowerShell script ForceFree-Tape.ps1.  The syntax of this command had me stuck for a while, so here’s a post to explain it.

During the creation of a SharePoint 2013 Enterprise server to investigate PowerPivot I ran into an odd issue during the SQL Server 2012 SP1 configuration.  Following the instructions here, I found that at the Instance Configuration step, the named instance screen was blank and un-editable, but installation failed to continue because I got the error “The Instance name is required but is missing.”  Below is how the screen looked.

The fix was easy, right-click on the SQL Server setup.exe file and choose Run as Administrator.  Oddly, I had to do this even that User Account Control was disabled on the server.  The named instance was then correctly populated as shown below. 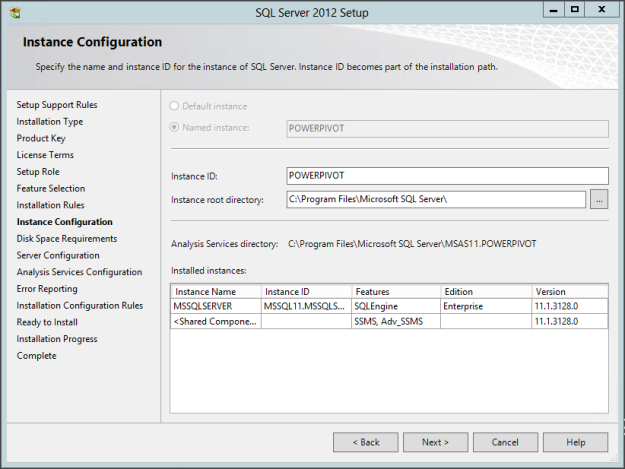